By adopting the Community Preservation Act, Framingham will:

Today, there are potential Community Preservation projects across the City in every voting district.

VOTE YES FOR COMMUNITY PRESERVATION ON THE NOVEMBER BALLOT

The November 2020 referendum gives voters the opportunity to say YES to CPA for Framingham. The ballot question summarizes proposed CPA provisions recommended in May 2020 by a citizen CPA Study Group appointed by City Council. City Council unanimously adopted these recommendations in July 2020 by an 11-0 vote and authorized putting a CPA referendum on November’s ballot.

Community Preservation’s supporters come from all corners of Framingham. We believe that the City can improve the quality-of-life of residents by protecting open space, expanding outdoor recreation, preserving historic resources, and supporting affordable housing.

Please join us! Get involved now!

WHAT IS THE COMMUNITY PRESERVATION ACT

Massachusetts’ legislature passed the Community Preservation Act (CPA) in 2000. CPA’s goal is to address the difficulties that municipalities, Framingham among them, have finding money for quality of life projects.

CPA permits cities and towns to create a Community Preservation Fund to support such projects. 177 cities and towns have adopted CPA by local referendum since 2001. They have raised over $2.3 billion for over 12,000 local community preservation projects. This includes more than $670 million they received in state matching grants.

By passing the November 2020 CPA referendum, Framingham voters will enable the City to receive the same rewards and benefits.

If Framingham’s voters approve the November 2020 CPA ballot referendum, we will begin to build our own Community Preservation Fund in July 2021.

If Framingham had adopted CPA in 2001 as is now proposed, Framingham would have collected an estimated $30,000,000 for its Community Preservation Fund. The Fund would have received a state match totaling $6,000,000 or more.

This money would have supported hundreds of local community preservation project opportunities, which instead were lost, compromised, delayed, or made more expensive.

Today, the City’s budget is more constrained and less able than ever to pay for these projects.

Millwood Golf Course. The City’s Open Space and Recreation Plan had identified this 64-acre privately held golf course near Callahan State Park as a priority parcel to protect. Framingham had a right-of-first-refusal to purchase if it ever came on the market. But when it came up for sale, Town Meeting could not muster the will to commit funds for its purchase. Instead, a developer purchased it in 2018 for market-rate, adult-restricted housing, with only a small parcel alongside Millwood Street designed as Open Space.

Historic landmarks threatened and with an uncertain future

Athenaeum Hall (1847) is adjacent to the Watson Place Fire Station (1901), vacated in 2019. The Athenaeum was closed in the early 1990’s. Built as Saxonville’s Town Hall, the Athenaeum has served in many public capacities. Today, it is the City’s most threatened historic building, empty for nearly 30 years. In 2015, the Town paid for a detailed design for revitalizing the Athenaeum as a Community Hall. But Framingham has failed to commit funds for this renewal. CPA funds could make a difference here.

Village Hall (1834), once the Meeting House on the Centre Common, is today a venue for community events. For many years, it needed rehabilitation to meet current building standards (fire suppression, electrical, ADA compliance) and to address years of deferred maintenance. Time and again, Town Meeting failed to approve these repairs.  Finally, in 2016, with the building on the verge of being closed, repairs were approved and the work was completed. CPA funds could have paid to this work sooner and at a lower cost.

Farm Pond could be the outdoor recreation hub of South Framingham. Only a tenth of a mile from downtown, with a 149-acre pond, the park offers fishing, boat access, a playground, bocce courts, and walking trails. But it’s potential for outdoor recreation has not been fully realized. There could be new walking/biking trails around the pond and south along the Sudbury aqueduct. There could be a dog park, a splash park, new launch sites and facilities for kayaking and canoeing, better family picnicking areas, and more. CPA funds could make this happen.

GET INVOLVED:
Vote, Volunteer, and Donate

Our campaign timeline to educate voters about the CPA referendum is short. We need your help now to reach voters and motivate them to vote YES. 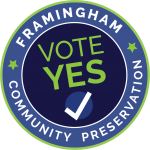 Please vote YES for CPA on the November CPA referendum. There are three ways to vote.

We need volunteers to help educate voters about the benefits that Community Preservation will bring to Framingham and to encourage voters to say YES to CPA.

Here are some ways you can help:

Send us your contact information and let us know what interests you.

Printing and postage are expensive. We need your help with those costs. There are no donation limits for referendum campaigns.

Electronic Giving
Easier for you, if you have a credit or debit card, you can use it to donate through our designated site. Just connect through the secure link below. We have chosen this site because it collects the information we must submit when we report donations received.